Ruben Olmos, president of Global Nexus LLC in Washington: “This will be the first presidential election in which the relevance of independent candidacies will be tested, as they are a relatively recent figure in Mexico’s political system. According to the National Electoral Institute, at least 85 citizens have registered to run as independents. Many of these candidates come directly from the ranks of political parties, as is the case for Margarita Zavala and Governor Jaime Rodríguez, ‘El Bronco.’ These spaces, designed for civil society, have also been exploited by traditional politicians.

The case of Zavala is relevant, as she was considered among the strongest PAN candidates by recent polls. As soon as she announced she was running as an independent, the so-called Citizen Front, formed by the right-leaning PAN and the leftist PRD, and its potential candidate Ricardo Anaya (PAN’s chairman), slipped to third place, according to the latest poll by El Financiero-Bloomberg, securing around 16 percent support. Vote fragmentation may become an opportunity for the ruling PRI, as the same poll now places the PRI’s frontrunner, Interior Secretary Miguel Ángel Osorio Chong, in second place, ahead of the Citizen Front. The PRI was very effective with a ‘divide and conquer’ strategy in the recent election in the State of Mexico, which it was able to retain. Nevertheless, the diversity of independent candidates is positive for Mexico’s young democracy, as it boosts discussion and pushes traditional parties to include different items in their electoral platforms, such as indigenous rights, gender equality and proposals for tackling corruption.

Parties will also be forced to differentiate their political views and position themselves on specific issues; for instance, the Citizen Front will have to be clear on its stance on civil liberties, an important issue for many of its traditional voters. The reality is that we will see a real competition among just two or three independent candidates. The rest are just part of a larger crowd trying to gain some public attention. Given how strong political parties and their political operations are in Mexico, it is highly unlikely any of the independents will succeed and become president.” 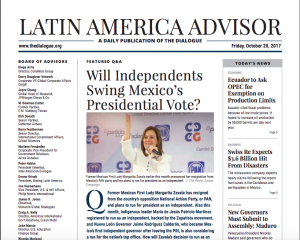