Ruben Olmos, managing partner of Global Nexus in Washington talks about the strategy of the Mexican President Enrique Peña Nieto on Sept. 29 unveiled about to create special economic zones in order to spur the economies of some of Mexico’s poorest southern states.

Ruben Olmos, managing partner of Global Nexus in Washington: “In order for this special economic zone to be successful, just as it has been in Shannon, Ireland, in Shenzhen, just north of Hong Kong or Korea, the government must think of how to better coordinate this part of the country with the rest of the well-developed central and northern Mexican states, and furthermore with the global economy. Without the construction of new ports, airports, modern highways or basic services for industries such as electricity, running water or access to fuels, investors are likely to turn their eyes to other areas. Projections from two key Chambers of Commerce in Mexico—Consejo Coordinador Empresarial and Coparmex—point out that the tangible benefi ts of the special economic zones will consolidate within 5 to 10 years.

The southern region of Mexico has already had important industry clusters that could be boosted by new foreign direct investment attracted by special economic zones. For instance, Oaxaca and Veracruz have developed valuable economic units and a skilled labor force for the agri-food industry. Meanwhile, Chiapas, Yucatán and Quintana Roo have made remarkable advances on tourism. Another strategic sector that can develop further is the renewable energy industry. The hope is that these zones could help strengthen the rule of law and change, over time, the insecurity that affects the business climate.” 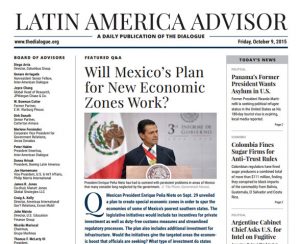