Who Are the Big Winners & Losers in Mexico’s Elections?

Rubén Olmos, managing partner of Global Nexus in Washington talks about the last gubernatorial elections in Mexico where the Institutional Revolutionary Party, or PRI, suffered major losses. “Sunday’s election reflected a more vibrant but still young Mexican democracy. While many of its candidates were former members of the PRI, the right-wing PAN and, especially, its national party leader, Ricardo Anaya Cortés, were the big winners in the election. The PAN, in alliance with the PRD, was able to capitalize on the anger and distrust toward the ruling PRI at the state and national levels. Corruption scandals, violence and the lack of credibility affected the party in key strongholds like Tamaulipas, Veracruz, Chihuahua and Quintana Roo, where the party historically had never lost. A second winner in this election was Andrés Manuel López Obrador and his party, Morena, which once again showed its dominance in Mexico City and now in states like Veracruz and Zacatecas where it competed for governor, coming in second. His party’s performance in the election together with the anti-corruption/anti-establishment narrative he is using across the country will be his biggest assets ahead of the 2018 presidential race. Next year will bring three additional statewide elections in Coahuila, Nayarit and the State of Mexico, the latter of which is President Peña Nieto’s home state and a PRI stronghold. While we are two years away from the presidential election, the race officially started this week, and we are likely to see changes and new alliances across the political spectrum between now and the end of the year when we will have solid names of people running for the highest office.” 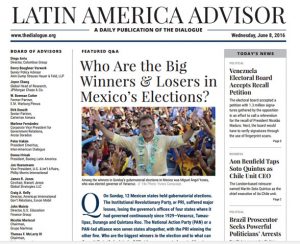