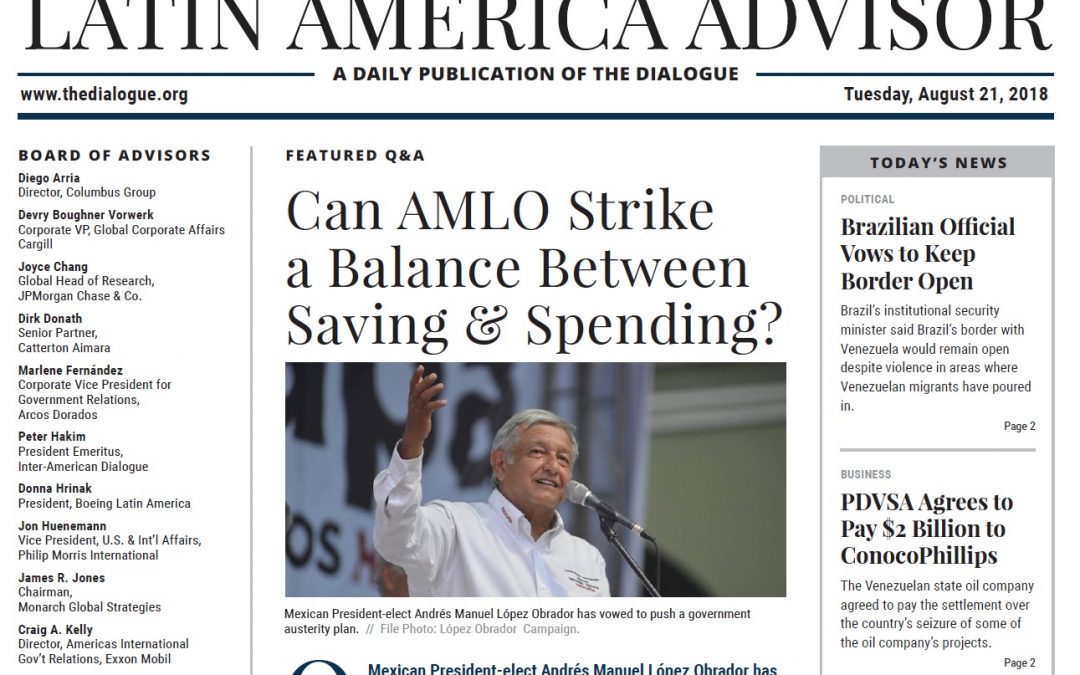 Latin American Advisor: Mexican President-elect Andrés Manuel López Obrador has said he will push government austerity measures early in his term, pledging to cut his own presidential salary by more than half, end pensions for former presidents, eliminate perks such as chauffeurs and bodyguards for high-ranking government officials and eliminate private health insurance that is offered to some public employees. What are the most important parts of López Obrador’s austerity plans, and how much resistance will he face in implementing them? What segments of the economy and businesses would be most affected by the measures? Would the cost savings translate to significant sums that could be budgeted elsewhere?

Rubén Olmos: “The landslide victory of Andrés Manuel López Obrador was in large part due to the extreme levels of corruption shown in recent decades, peaking during the Peña Nieto administration. The people not only voted for a strong presidency, but gave López Obrador’s ‘Juntos Haremos Historia’ movement the power in Congress to conduct major changes that will include deep austerity measures across all three branches of government. In fact, his ‘fourth transformation’ plan is based on cleaning the house and making sure public officials are effective and honest. The president-elect has said that he hopes to save around 500 billion pesos ($26 billion) through his austerity measures, money that would be redirected to social and economic development spending. AMLO has affirmed that he has received ‘displays of support’ for his austerity plan. However, it could still be rejected in Congress or at other levels of government that have budgetary autonomy, such as the judicial branch. Still, AMLO’s popularity gives him a great deal of political capital to push through this type of measure, even if he faces opposition. By early 2019, we will likely see several businesses affected by these measures including those that sell and provide services across government agencies such as financial and insurance, vehicles, consulting, construction and remodeling, and travel, among others.”