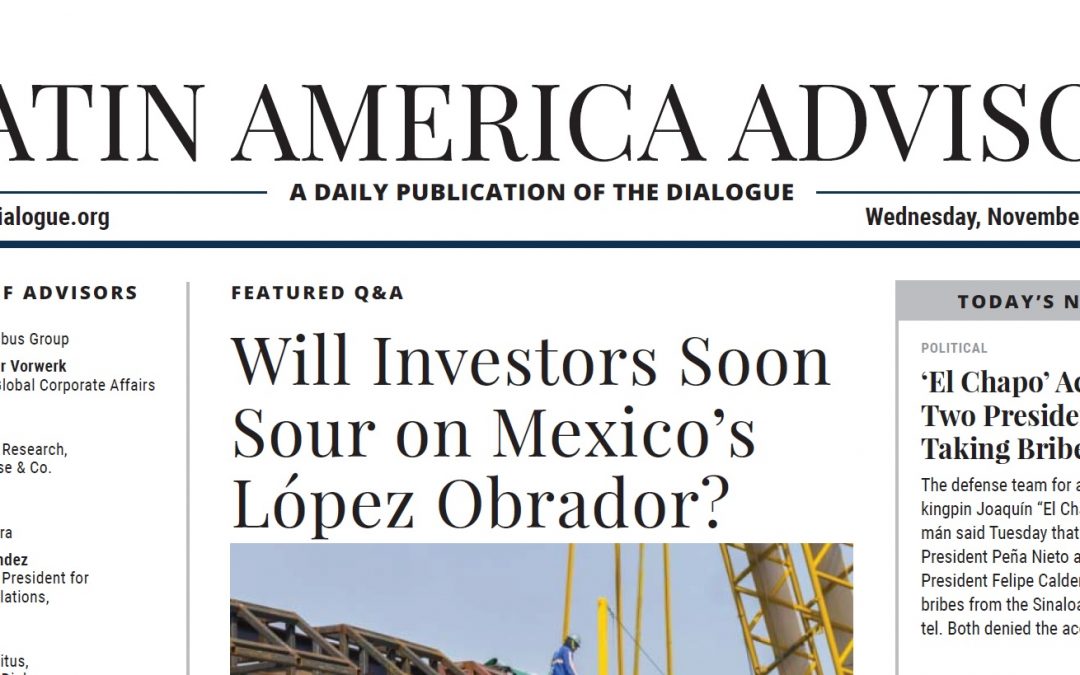 Latin American Advisor: Mexican citizens last month voted down the construction of a massive new airport underway in Mexico City in a referendum proposed by President-elect Andrés Manuel López Obrador. Days later, Fitch Ratings lowered its outlook on Mexico’s debt ratings, citing the airport decision and potential for López Obrador to unravel past reforms aimed at liberalizing stagnant sectors of Mexico’s economy. How much has López Obrador’s call to halt the airport’s construction weakened investor confidence in Mexico? How likely are López Obrador and his allies in Congress to roll back reforms in the energy sector? How is the private sector reacting to López Obrador’s election, and what is Mexico’s outlook for key economic indicators in the year ahead?

Rubén Olmos: “President-elect López Obrador’s decision to cancel the construction of the airport may increase uncertainty and affect domestic and foreign investment. Recent anti-business-friendly decisions by his Morena party—which has a majority in the Senate and Chamber of Deputies—will put a pause on foreign direct investment until we get more clarity of his inauguration message and, most importantly, his first 100 days in offi ce. Major infrastructure projects such as a touristic and cargo train announced for southern Mexico, among others, will likely receive signifi cant state intervention, therefore putting the brakes on external investment. The oil and gas industry is likely to suffer as a result of López Obrador’s efforts to clean up corruption in Pemex. He has announced increased scrutiny for contracts awarded on behalf of the outgoing government and will give preferential treatments to the state company, possibly at the expense of foreign companies that are willing to invest in the future of the country’s energy sector. Mexico’s real annual GDP growth will remain steady at 2.3 percent in 2018 and 2.5 percent in 2019.”