Ruben Olmos, managing partner of Global Nexus in Washington talks about  the attack on the 43 university students a year ago in Guerrero state.

“The fact that the Peña Nieto administration accepted the comprehensive report about the disappearance of 43 university students a year ago in Guerrero state released by a group of experts from the Inter-American Commission on Human Rights is a sign that the president is well aware of the damage that this incident has done to his image and to that of his administration.

The reality is that the rule of law and transparency—the lack of which have been some of the government’s biggest headaches—cannot be imposed in Mexico overnight. While the incident in Guerrero was a tragedy and an eye opener, this is not the only state where criminals have an influence on local authorities, including mayors and police. The new national security commissioner should continue to work with governors to clean up state police forces and local courts. He should work with the new Congress to push secondary laws to make the National Anti-Corruption System a reality and strengthen legislation on human rights and the functionality of all the police forces.

In fact, these were key items that the president mentioned in his state of the union address as priorities for his final three years in office. While Mr. Peña Nieto’s economic reforms were historic, the country will not see results without an honest judicial system that sanctions corruption at all levels and brings peace to desperate families countrywide. It is yet to be seen if all political parties in Congress will cooperate and work with the administration leading up to what appears to be an early 2018 presidential race to replace Peña Nieto.” 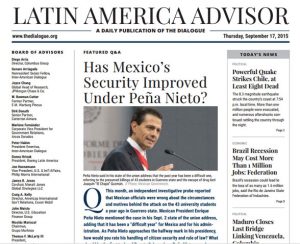