Do Narcotraficantes Have the Upper Hand in Mexico?

Ruben Olmos, managing partner of Global Nexus in Washington: “Guzmán’s escape is a major setback for the administration of President Enrique Peña Nieto, which has prided itself on having taken down top cartel leaders. This incident, which immediately drew negative international media coverage, puts a cloud over major accomplishments made by his administration.

Now we know that U.S. officials had sought Guzmán’s extradition, in part for precisely the fear that he would take advantage of the weak Mexican justice system to continue his traffi cking business. The U.S. government, at the cabinet level, has reiterated that it stands with its Mexican partners to provide further assistance to recapture him. However, it is clear that U.S. law enforcement agencies at the more operative level have lost trust in their counterparts, as this incident shows that corruption at all levels remains rampant.

This is yet a new great opportunity for the president to call major political actors to the table and revise not just the prison system, which is clearly outdated and outpaced by organized crime, but push judicial reforms pending in Congress and at the local level. Many in Washington argue that the Guzmán incident may likely have an impact on the background that Peña Nieto may want for his next ambassador to the United States. While security was never intended to be at the forefront of the bilateral agenda, today, things are different. We need somebody who will build bridges with security agencies and also continue to enhance our economic agenda.” 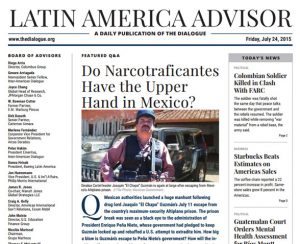